Interview by Natalie part 2 (For International)

The different approaches to "glory" and "Bubble"

── As a result, listening to the details of your performances has become a lot of fun. They can be enjoyed down to the strength of the cymbal.

Akane Right. In the past, I used the bass drum and the toms to fill in the sound gaps. But, from the recording of "glory" and "Bubble," I imagined every sound leaving an auditory impression, and I think our listeners will pick up on this. 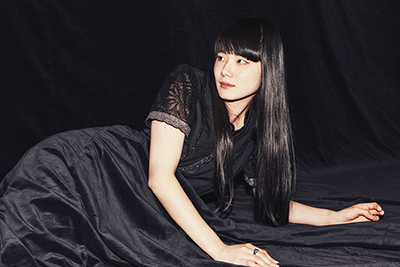 Misa I suppose the approach was to move in a balanced way from the high frets to the low frets.

── For the guitar, riffs rather than the solos have been created to leave an impression.

Saiki Well, it's possible that "start over" was the catalyst for something to change inside of her.

Kanami That's true, the approach for "glory" was to intentionally go for playing a solo behind the vocals. As for riffs, no matter the song, I always want to create ones that will leave a lasting impression but for "glory" in particular I was thinking that I wanted it to really come out strong from the very first sound.

── As Saiki mentioned before, in a previous interview it was mentioned that she issued a decree to ban guitar solos for "start over" (see BAND-MAID "start over" Interview｜New milestones in expanding their influence, stoic as they make their "next move"）、 but as a result, I felt that Kanami-san has played more freely than she did before.

Saiki I agree. We said we would try to get rid of guitar solos in "start over" and now Kanami seems like a riff master compared to the sound on our demo releases because we stopped making songs centered around guitar solos. Also, all of us members think that a song with a catchy riff is great so we are getting across that maybe that's the point we thought about the most. She really has changed the way she expresses her ideas although I think for her it was unconscious.

Kanami It might be like that, especially for the melody. Our approach has been to create songs that are easier to sing.

── Transformations start in songs in that way; what specific approaches did you take for your songs, Saiki-san? 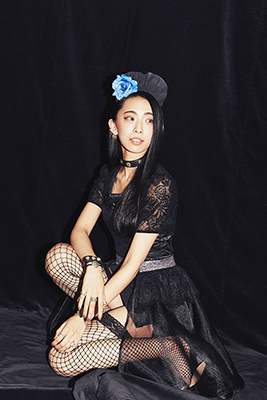 Saiki The "Yu-Gi-Oh! Vrains" anime had a completely different feel than the original "Yu-Gi-Oh!" but I had heard that its fans ranged from little kids to adults, so we were careful to do things like make the English lyrics of "glory" words even little kids could sing along to and ensuring that we pronounced the words in a way that they could be easily understood. And a song like this one was a first for us.

──Ah, a song with a bouncy rhythm is definitely a first for you.

Kanami Isn't this kind of rhythm really popular now? (laughs). That's why we thought of possible using it one day and since we felt like it could work in this song we decided to go with it.

Saiki Because of that we decided to go with a lyrical tone that fit that sort of tempo for this one and for "Bubble," I had wanted to imagine a flower blooming in that gloomy atmosphere of the original work, a comic called "Perfect Crime" that I had already read.

We have to always come up with something new!

── By the way, Band-Maid is best known for their harmonies on the lower octave, but you really create some elaborate chorus sections too. How do you go about putting these together?

Kobato After we record the main part of the song we just go "Alright, it's time for the harmonies! ," we have that sort of attitude and turn the switch in our brains to that mode then we record it while Sai-chan and I figure out what to do-ppo.

Saiki At the recording stage we go ahead and record plenty of harmonies and ad libbed parts then during the mixing we usually decide which of these harmonies to use.

Kobato Sometimes we record at most six or seven parts then during the mixing we change some out, put some in, or remove parts until we finally settle on, say, two parts. There are lots of times when I say "that was the most difficult haromy-ppo!" for something that ends up getting erased later-ppo. (laughs)

Saiki There are times when we decide to not even use any of them, too.

── How do you go about deciding which ones to keep and which to remove?

Kobato We listen to the mix and we decide by exchanging our opinions with each other, for instance, Sai-chan says things like, "We don't need this," and then I will respond with "Kobato thinks it should be like this-ppo!" , kind of like that.

Saiki There are a lot of times when one of us won't back down on something. "This stays!" "This has to go! ," that kind of thing.

── You sure are coming with some wonderful results in the end based on what you decide on.

Kanami That's why the impression it makes on me just when it's finished is so amazing. We leave the harmonies up to those two so we end up saying "Whoa! You put that kind of harmony here, awesome!" after it's done.

── At any rate, whenever I listen to what all of you in Band-Maid have to say, you make me think "These girls sure are going to keep getting better from now on."

Kobato Those are the nicest words anyone could say to us-ppo!

Saiki I'm flattered! Now I can start this year in a good mood.

── But I think it's because all of you always handle your creative activities in a stoic manner.

Kanami We're actually working on a song at the moment and we hope that all of our masters and princesses, as always, will look forward to us showing off a new side of ourselves. We saw the Queen movie ("Bohemian Rhapsody") and thought again that we have to always come up with something new!

── You have to have the courage to go against the record labels and tell them "No, this is fine!" even if they say, "You can't do a song like this."

Kanami Yes, exactly. (laughs) "We're going with thisss!" ....is something that I think Saiki-sensei would definitely say.

Kobato None of us would say that ourselves (laughs).