About the lyrics of "glory"

──Next, let me ask you something about the lyrics as well. From a fan's point of view, with lyrics such as “the whole wide world”, which is sung in the choruses,

I felt like BAND-MAID's awareness of the world, which is also shared by "DOMINATION", one of your previous songs, really stood out. What did you particularly pay attention to when writing the lyrics? 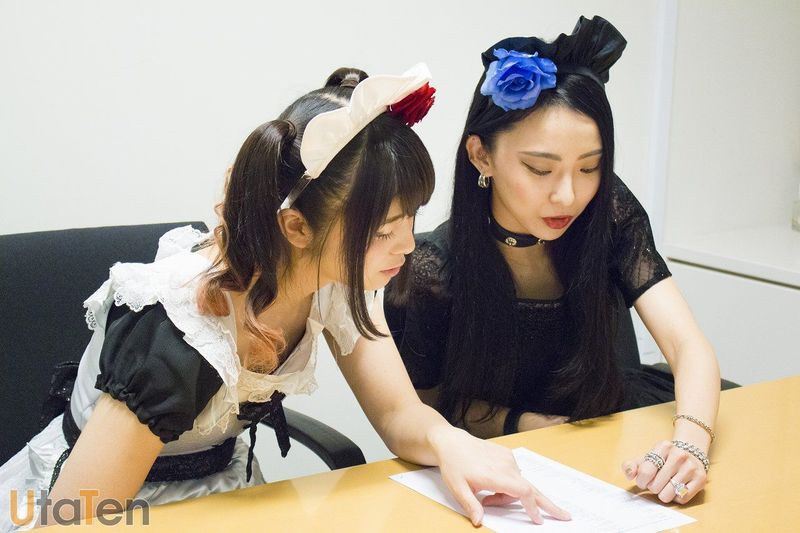 Miku Kobato :This time, we started making the song after we received a tie-up proposal from the "Yu-Gi-Oh! VRAINS" staff, and we wrote the lyrics afterwards. .

So, we took into account the "Yu-Gi-Oh! VRAINS" worldview when writing the lyrics as well.

──What exactly do you mean when you say "worldview"?  Miku Kobato: A major theme in "Yu-Gi-Oh! VRAINS" is the coexistence of AI and humans,  so we stuck to that theme when writing the lyrics. For example, "singularity", a word which also comes up in the lyrics, is an AI term which stands for "technological singularity".  *A "technological singularity" is a concept which says that AI (artificial intelligence) may advance and surpass human intelligence, resulting in a big change to our lives.  ──I see you've read up on it thoroughly!  Miku Kobato: On the other hand, I also wanted the audience to be able to sing the song together with us.

From children to adults, an audience of a wide age range watches "Yu-Gi-Oh! VRAINS",

so I wrote the lyrics while making sure they are easy to sing, such as by not using English words that are too difficult, even while describing an AI world.  ──I see. The word "glory" in the choruses also has a somewhat more relaxed melody to it.  Miku Kobato: Wordplay and the ease with which it can be sung give it a nicely packed feeling. Also, the world "glory" itself really stays in your head after hearing the song, so, after completing the lyrics, we decided the title would also be "glory".

──Ms. Saeki, do you have a favorite part of the "glory" lyrics you would like to sing together with the world's "husbands and ladies" at a live? 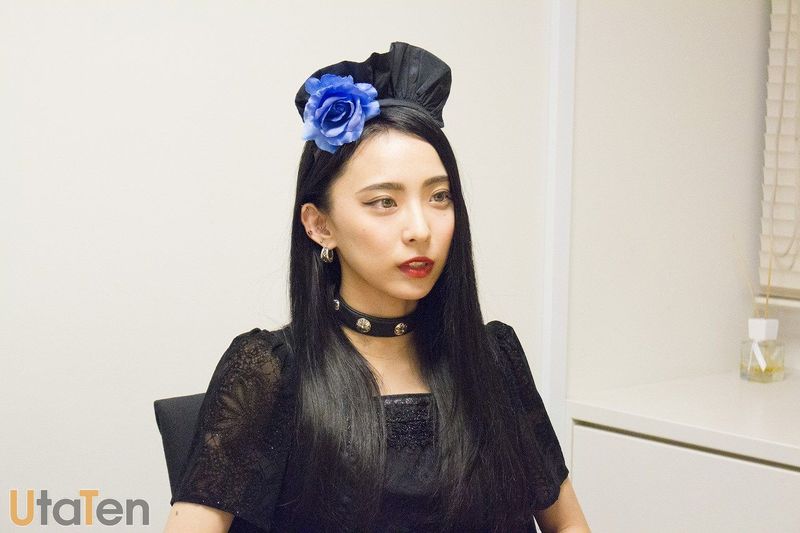 Saiki：Lately I've been performing "glory" even while waitressing. I want to sing the parts in English together with the fans.

For example, "the whole wide world" in the choruses, and also "only glory" / "over and over!".

And after that, everyone will get hyped up when Kobato joins in after the second “calling, calling, calling, now.”, so I want to sing it together with everyone.  ──The song really gets heated up all of a sudden after the "calling, calling, calling, now."!  Saiki: It's like we all jump up suddenly when that part comes.  ──And after that, two sung phrases overlap at the beginning of the last chorus.  Miku Kobato：Yep.  Saiki: They really get excited when that part comes! There were also "husbands and ladies" who didn't know which part they shout out (laughs)  Miku Kobato：Just about half of them sang one part, and half the other.  Saiki：I was happy to see some of the "husbands and ladies" in the audience singing the follow-up part.  ──"hide-and-seek", the B-side song, has a feel to it completely different from "glory". Did you plan from the outset to pair these two songs together on the single?  Saiki: We chose "hide-and-seek" from our stock of demo songs. While arranging it, we transformed it so it would make a nice pairing with "glory".  Miku Kobato：We didn't change things like its melody or rough tempo.  ──I really liked the contrast between the two songs. When listening to the two songs on the single, you get the same feeling of satisfaction as you would after listening to a mini-album.  Miku Kobato: We'd be glad if you thought of it that way.  ──Were there any lyrics in "hide-and-seek" you were particular about? 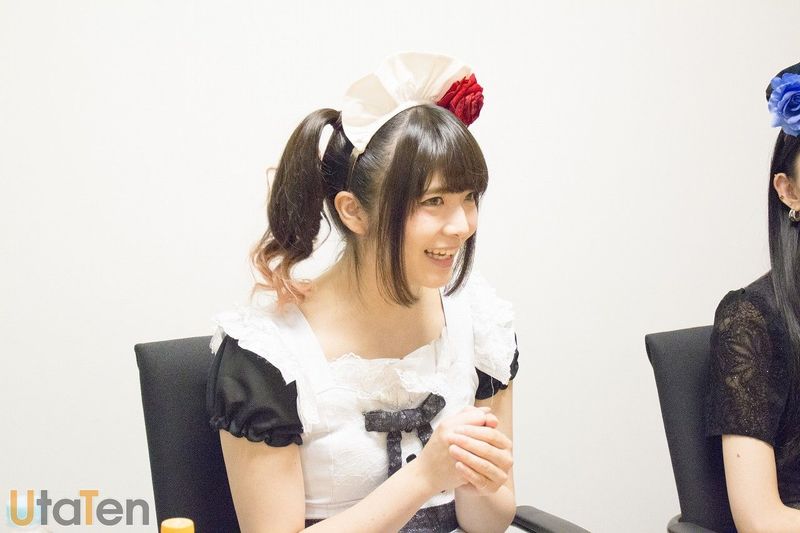 Miku Kobato: It's a song with a good rhythm, so we paid attention to the rhythm in particular. When choosing words for the choruses,

──How did you decide on the title?  Miku Kobato: I've had the lyrics for some time now, jotting down whatever I came up with. While I was researching English words, I found out what "hide-and-seek" meant.

. I decided to use that word, because it was so cool! So, when the time came to make the B-side song,

I thought now was the time to use "hide-and-seek", so we put it as the song title.

──Were you passionate about the song itself?  Miku Kobato：Hmm... KANAMI had made several demo songs, and I'd been listening to it from before, so we put it into stock as something we could use later. So...

Saiki: When it comes to our passion as the entryway for this song... (laughs)

──(laughs) I love how frank you are!  Saiki: We picked it based on how good it would go together with "glory", but I think we'll become more and more passionate about this song as we go on to perform it.

Mine and Kobato's worldviews came together.

──Next, I would like to talk about "Bubble", the main song on "Bubble", your 5th single. It's been chosen as a tie-up song for "Perfect Crime", a drama by ABC and TV Asahi. Congratulations on your first broadcast television drama tie-up!  Miku Kobato:Thank you very much!  Saiki: Thank you!

──I hear you had already read the original work.  Saiki: Everyone was reading the manga, so we were shocked when a tie-up proposal came!  ──I've read the manga as well, but... It was quite... 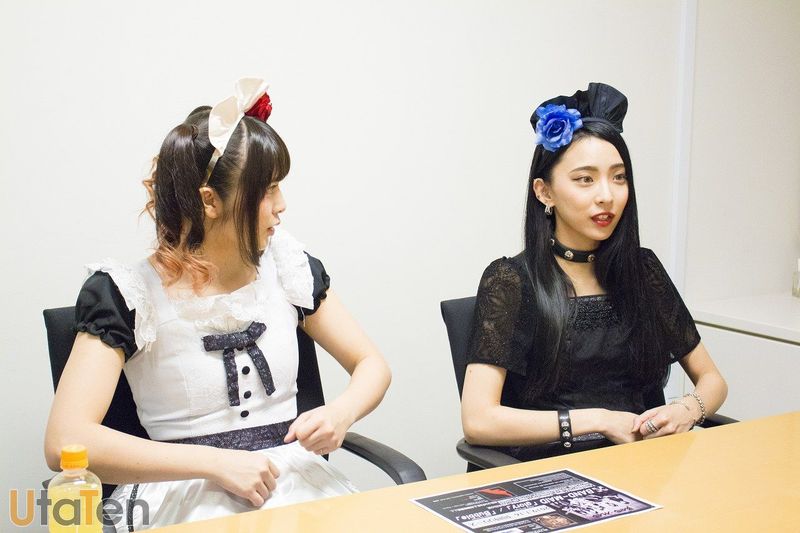 Saiki：In the manga, the pictures are cartoonish, but if you read the novel, there's only text, so it seems more violent... The story unfolds quickly... It's dark and gritty... And its creepiness stands out.  Miku Kobato: When you read the text, it feels more direct.  Saiki: I think that sort of dark and eerie atmosphere fits such a creepy story.  ──What's your favorite phrase?  Saiki: I like "eeriness". It has a nice contrast to it, it stays in your head, and it's a perfect fit for the Perfect Crime drama theme song.  ──That part at the end when the rhythm suddenly changes and you recite the lines in English is quite innovative.  Saiki：I think KANAMI, our guitarist, wanted to use recitation a song, so she told Kobato that.  Miku Kobato: When we finished the demo, the recitation still had somewhat of a melody to it. But, I wanted to make the composition even more cool. So I thought it would be better if the recitation in English ignored the rhythm, and went at its own tempo.  Saiki: Kobato, what's your favorite phrase?  Miku Kobato: I like the "Wake me up!" at the very end of the song. There's no "Hey!" in the main vocals, but we put the "Hey!" call in the choruses. That's something we haven't had in our songs before.  Saiki: Like "The long / obvious / fake".  Miku Kobato: So, make sure to listen to the parts of the song with the calls.  ──By the way, in your previous Utaten interview, you said that Saiki gives you her opinion when you're not satisfied with the lyrics. How was it like this time around?  Saiki: I haven't commented on the lyrics in a long time.  Miku Kobato: That doesn't happen at all anymore.  ──Did you and Ms. Saiki get to the point where you're able to share your worldviews?  Saiki: I feel like we've achieved a stronger sense of unity as a band. I personally have also come to understand what Kobato wants to write, and Kobato's lyrics have become closer to my choice of words.

──While spending time together.  Miku Kobato: I'm can now write the songs while taking into consideration things like, "Saiki will find it easier to sing this way", or "This is a better way to end the sentence". I'm able to do that precisely because of the challenges we've surpassed so far.